On Friday, October 5, 2012, Matt and Donald departed Corpus Christi in route to Harbor Walk Marina.  The wind and surface conditions were nearly perf ect.  An outgoing tide at Port Aransas caused exiting the Port A jetties just a little rough.  The trip was completed in 23 hours covering 170 nms.  Ruthless had not been offshore in nearly 6 months and performed according to her heritege.  Entrance to Freeport jetties was planned for sunrise. 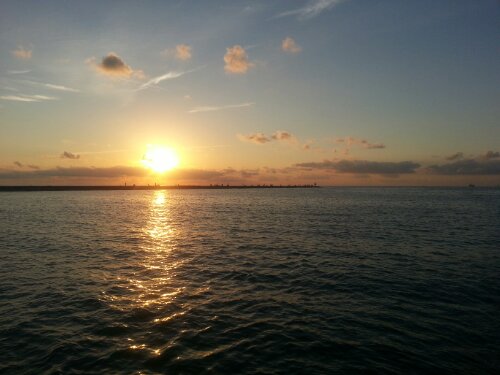 The trip east on the ICW from Freeport was delayed for about 30 mins. as Ruthless waited for a tow to clear the Freeport wiggles and the Surfside Bridge. Once underway from Freeport, Ruthless entered the Harborwalk Channel off the ICW at 12:30 PM. We decided to stop at the Harborwalk fuel dock and top off the fuel tanks. At 1:30 PM Ruthless was secure in her new home, Slip F-5.