The Moon, as Donald calls it, was run October 25 – 28, 2012, from off Galveston Island to Port Aransas, Texas.  The regatta is scheduled to coincide with the Harvest Moon in October each year.   205 boats and their crew entered the race.   Ruthless competed in the Cruising Spinnaker class along with 29 other vessels and crew.   The Ruthless crew included Christine, Matt, and Steve whom had sailed on Ruthless in past Moon’s and other regattas.   It was Kevin’s first regatta and first overnight, offshore sailing trip.

200 plus boats gathering in the vacinity of the start line is an awesome sight.  Each crew manuvering their small ships into position for the start shows their seamanship. 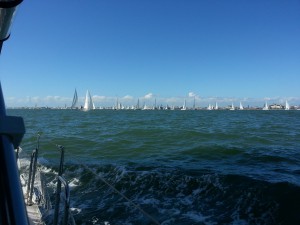 The Cruising Spinnaker class start at 2:30 PM, was exciting, particularly for those boats that tried to gain the closest position to the outer pin.   Donald manuvered Ruthless into the middle of pack and as the last few seconds ticked down to the start the boats around Ruthless cleared in front of her and our start was clean and quick.  Being in the middle of pack results in one dealing with “dirty air” from the windward boats for about the first 1/2 mile.  Once Ruthless got fresh wind, she settled into a steady 6.5 to 7.5 knt boat speed.

We cleared the Freeport Outer Bouy at 08:19 PM, adistance of about 45 miles.   The wind increased steadily after sunset above 20 knts.  As a result, our boat speed was in 7-8 knt range, increasing to 8 knts. when the wind got above 25 knts.   We sailed a heading of 232 degrees, which was a dead recheoning course to Port Aransas.   The course put us approximately 7 miles off the Texas coastline.  Around 2 PM, Friday morning the wind started to die down and soon was in the 4-7 knt range and our boat speed dropped to less than 3 knts.   By 4 AM, the wind was almots dead calmand the boat was not moving at all.   Christine was at the helm around 5 AM, and the boat did a complete 360.  Shortly later, it did a 180 and appeared to be headed back to Galveston.   That was not the case.   Around 6 AM, the crew began to feel a cooler air flow from the north and knew that the front of the norther was nearing our position.

The north wind began to build as we reefed the main and took in several turns of the furling head sail.  Our boat speed also increased to above 8 knts and within one hour we were varying from 9 to 11 knts.    Kevin was at the helm when the wind increased to the 30’s with 13 knts of boat speed showed on the SOG indicator.   Kevin yelled when we hit 13.8 knts.  We covered the last 65 miles in just over 7 hours averaging 9 knts an hour. 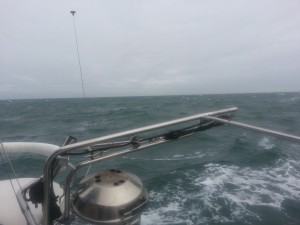 The seas were confused following several days of strong south and southeast winds and then presented with the 35-40 knt north wind conditions.   Steering the boat was difficult because the wind was coming at us from 65-80 degrees off our starboard stern.   The waves would lift the stern and the force would cause the boat to try to head to starboard.   Donald stayed on the helm for the last 2 1/2 hours of the race.   Ruthless crossed the finish line at 2:44 PM Friday, 24 hrs., 14 minutes after her start.   She was the 3rd boat out of the 30 boats in the fleet to finish.   At the awards ceremony Saturday night under the Port Aransas Pavilion, we learned we earned 2nd place finish, based on adjusted time, in the Class A Division.   It was a successful finish and thanks go to the whole crew. 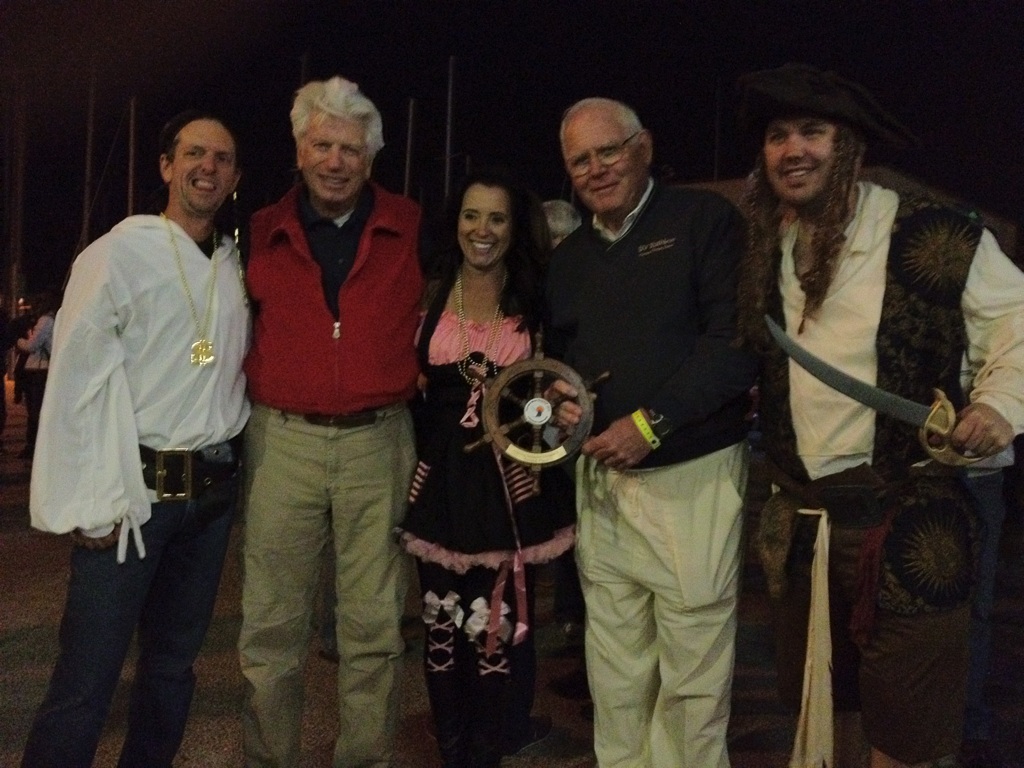 Christine, Matt and Kevin decided to add some revelry to the awards party by dressing up as pirates for Halloween.   Christine and Kevin got the most attention from many of the party goers.